When I was growing up, I always thought it was a cliché to hear people say that the year has passed SO quickly, but this year, I got to witness this first hand. 2018 passed VERY quickly! 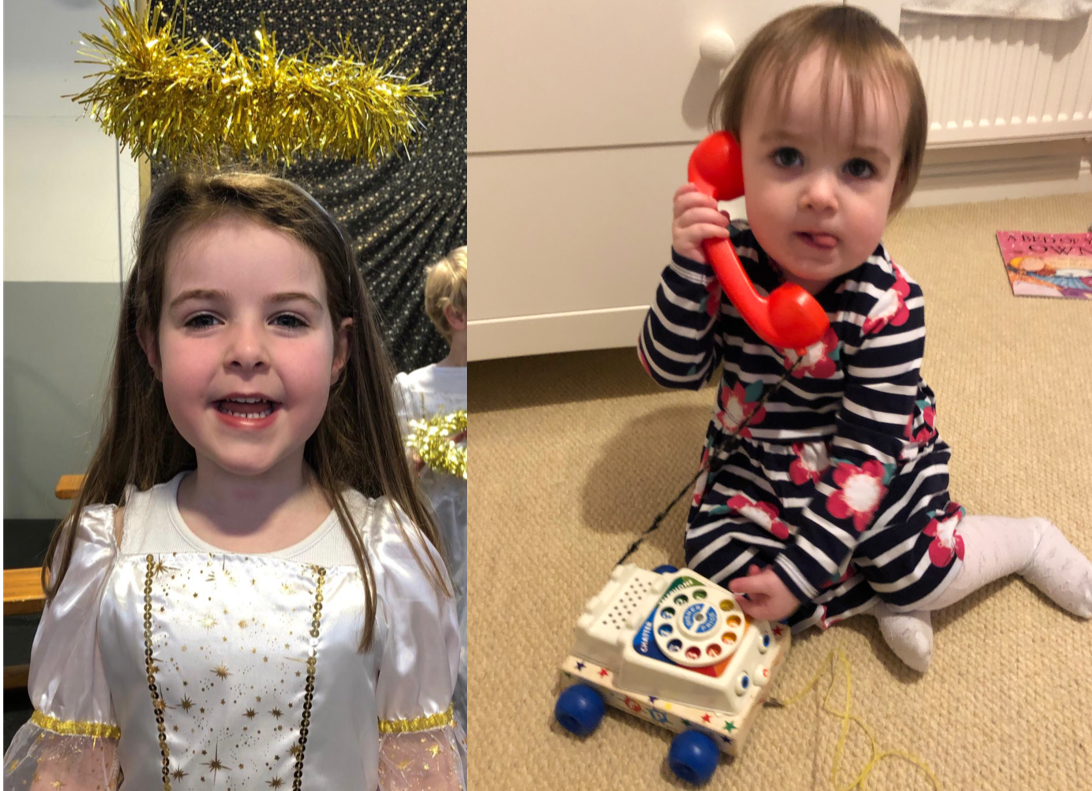 It is hard to believe that our eldest child is away to Primary School and our youngest is almost 2! Where has this time gone!?!?

2018 as been a VERY busy year, in which there have been some highs, and some lows (there were two deaths in our family this year).

As per the post that I did last year, this post is a brief recap, in no particular order, of some of the highlights of 2018.

In January, I started working for Chocolatey full time. This was a huge step for me, and I am very happy to say that it has been going very well, and I am excited to see what 2019 has in store for us all. Throughout 2018, the Chocolatey Team has expanded, and it is looking set to expand further in 2019. Some very exciting times ahead.

As a result of starting to work from home, this saw a conversation of half of our garage from this: 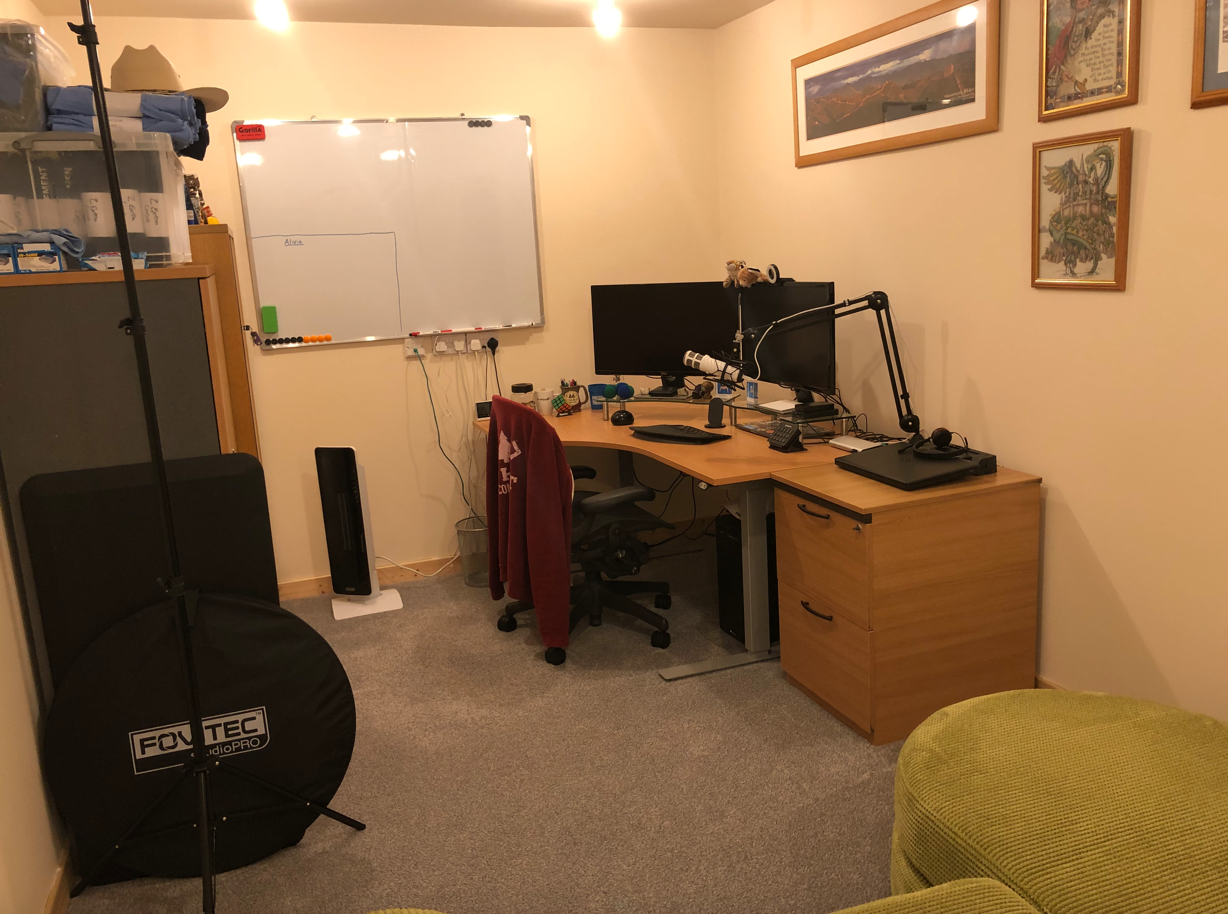 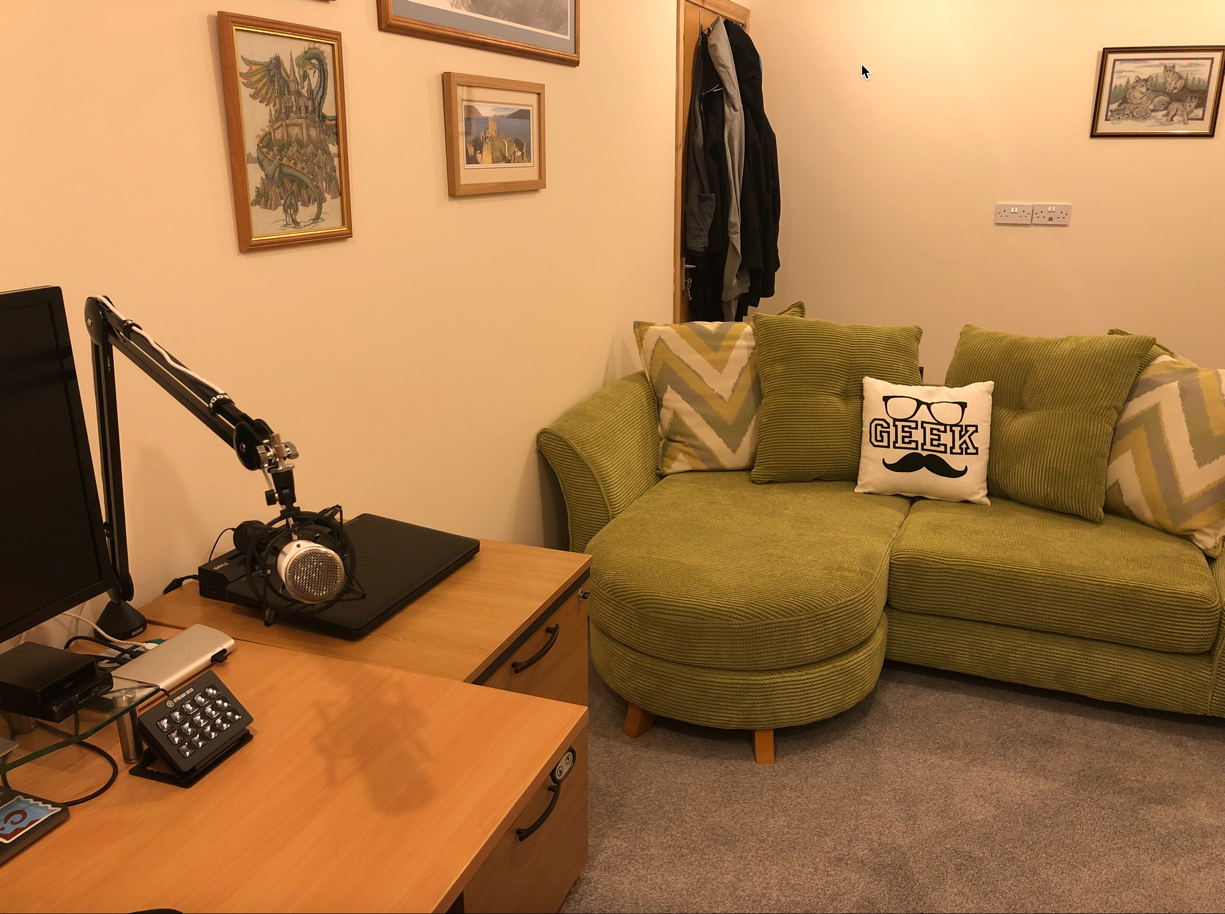 It has been a busy year for Chocolatey, starting off with me travelling to Kansas to spend a week with Rob, as an introduction. Since then we have been busy working on new releases across all Chocolatey components, with my main focus being on Chocolatey Central Management, which is now available in beta for customers to trial out. In addition, we released a new version of Chocolatey GUI.

Starting in January, and going into February, I went on the road and presented at a number of .Net User Groups. This included talks on both Chocolatey and Cake. This was my first time doing anything like this, but I had such a good time, that I am planning on doing the same thing in 2019. Stay tuned for more information on this.

I had heard a lot of good things about the PowerShell Summit, and I am happy to say that I wasn't disappointed. This was a great event! It was a chance to meet a lot of people from the community, far too many to mention here. If you are on the fence about attending this event in 2019, I would definitely suggest that you jump at the chance while there are still tickets available.

Chocolatey was a sponsor at this event: 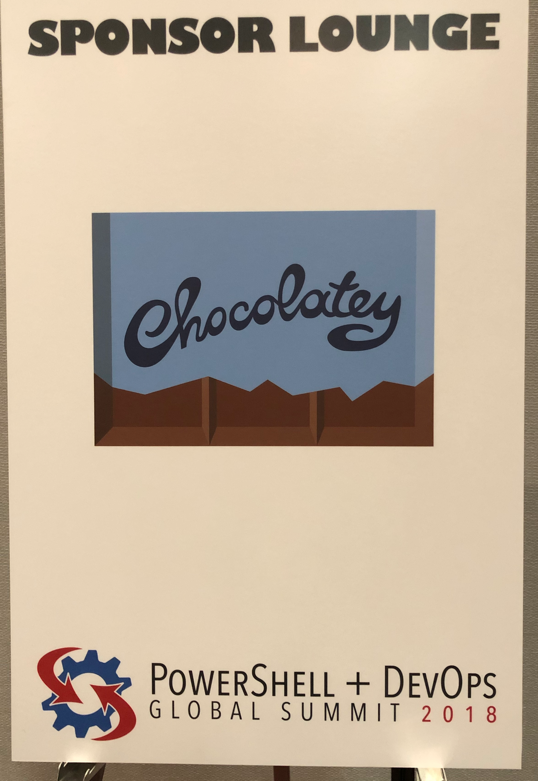 It was on this trip that I saw one of the most bizarre things I have ever seen... 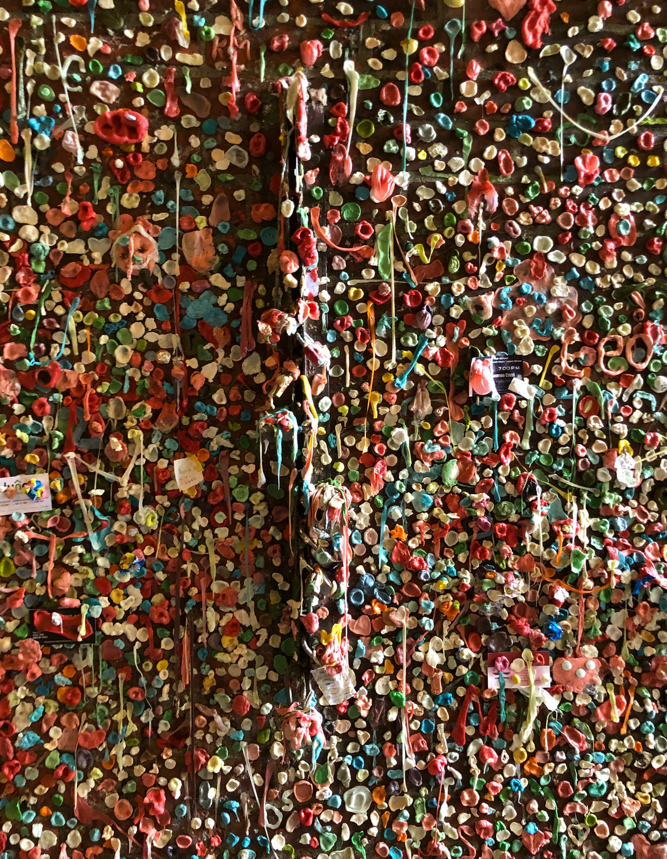 Yes, that is actually an entire wall covered in bubble gum. The smell in that alley was crazy!

In June, I made a trip to the DevOps Usergroup Gothenburg to visit my friend Mattias Karlsson and present a talk on Chocolatey: 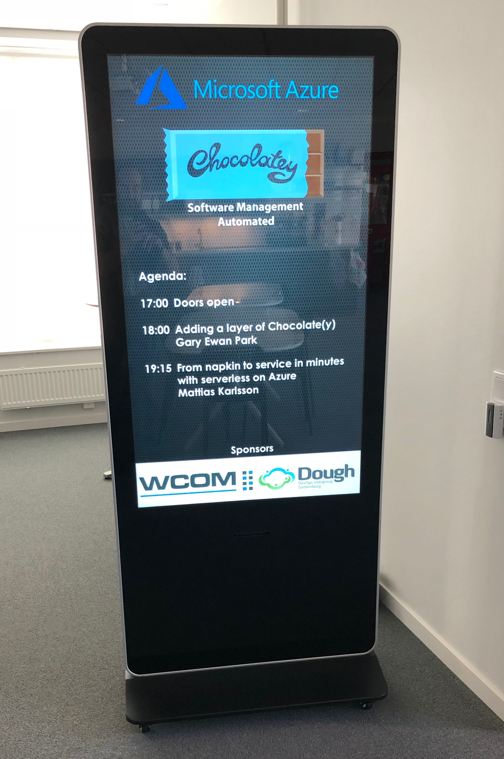 I had never been to Sweden before, and I thoroughly enjoyed this trip!

Bottom line... this was a great event, and I would thoroughly recommend anyone attending it. Everything about the conference was well organised, and the talks were very high quality.

At this event, I helped run a Chocolatey Workshop along with Rob Reynolds: 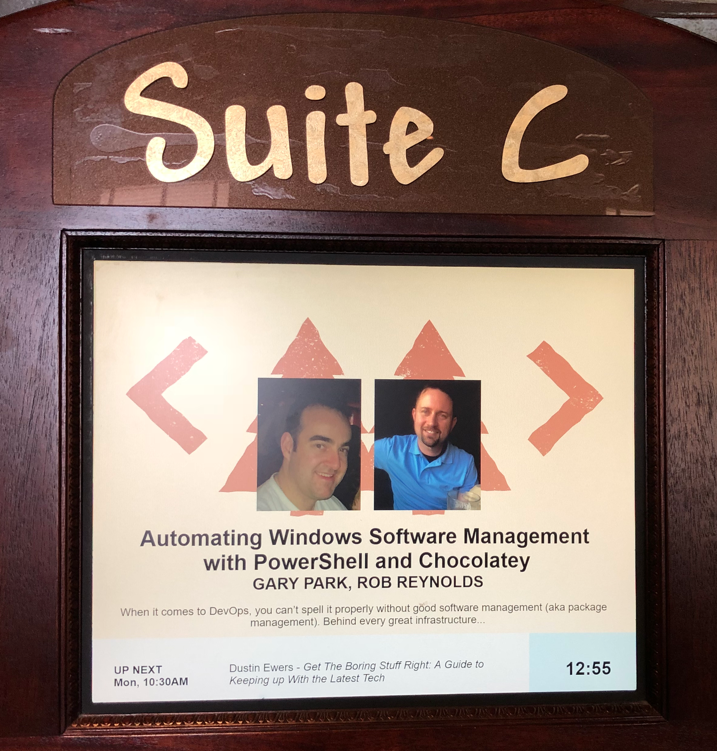 One of the highlights of the event had to be the bacon covered in chocolate: 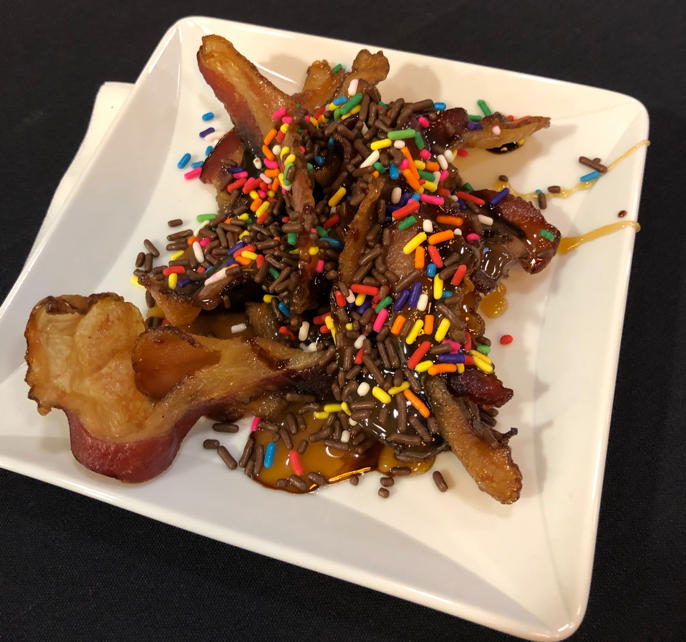 My fourth trip to the States in 2018 was to attend the inaugural Chocolatey Fest Conference and Puppetize Live events. 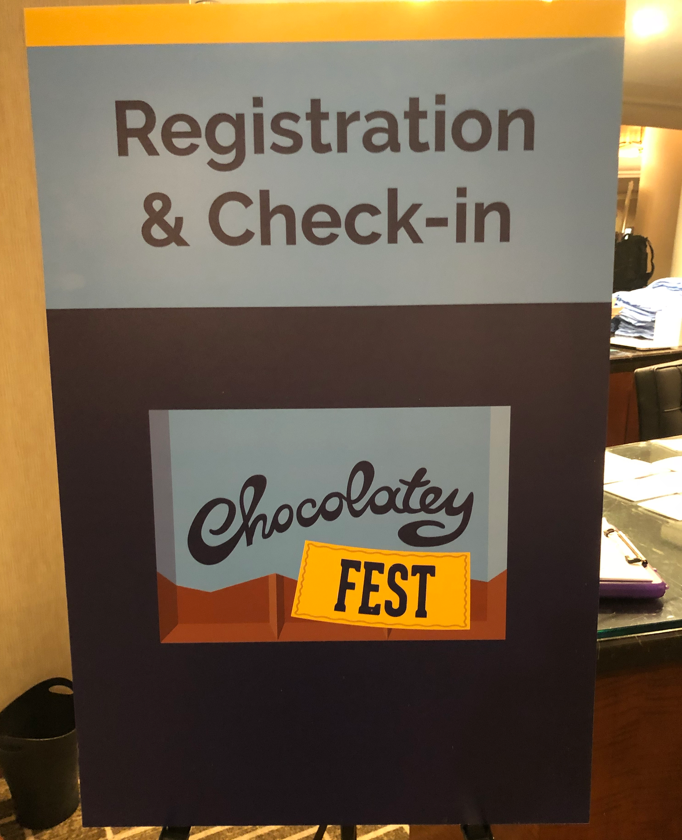 The feedback from the event was very positive, so all the hard work that went into the organistaion was definitely worth it. There was even some signature Chocolatey coins: 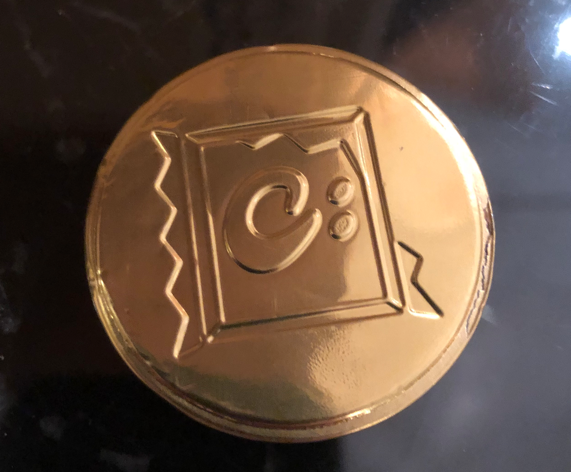 At this event was also the first run of a Chocolatey Workshop that myself and Paul Broadwith were doing. This focused on how you can use Chocolatey internally within your Organisation, and ensure consistent and reliable installations by internalizing packages.

This was my fourth year attending the WinOps Conference (this is getting to be a habit), and once again, it didn't disappoint. Lots of conversations were had, and the talks that I attended were of a very high standard. This year was slightly different in that I was presenting a workshop along with Paul Broadwith. This was our second time doing this workshop, and we incorporated a number of feedback points from our first outing, and I think it was a lot better this time around.

Chocolatey also had a booth at the event, where we were able to talk to lots of people interested in using Chocolatey.

In July, I was very happy to be informed that I was being renewed as a Microsoft MVP. 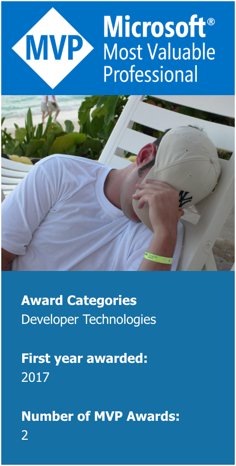 In all honesty, this wasn't something that I was expecting, and I was very excited to get the email letting me know. In August, the MVP Package arrived in the post, and I was able to add to my main MVP award: 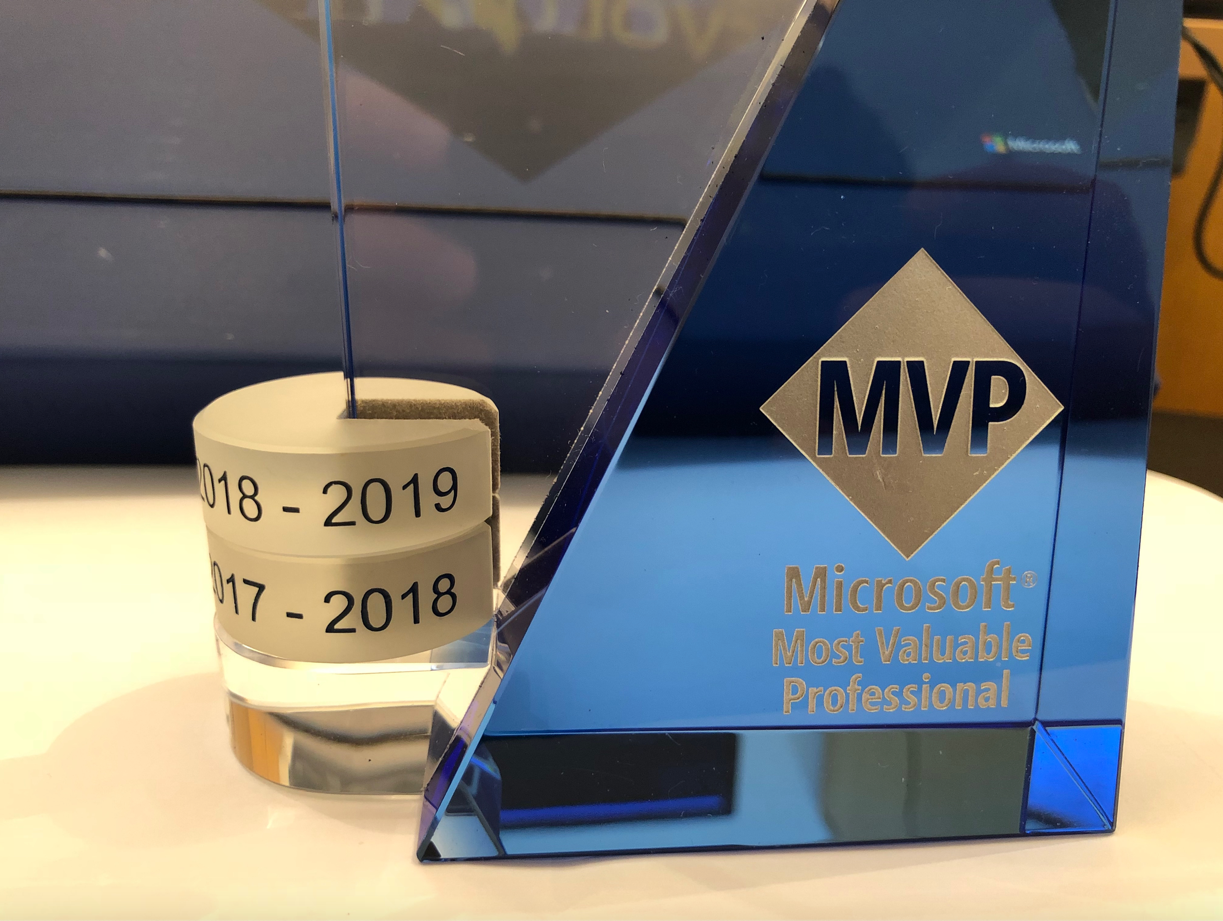 I thought the instructions on how to do this were very useful: 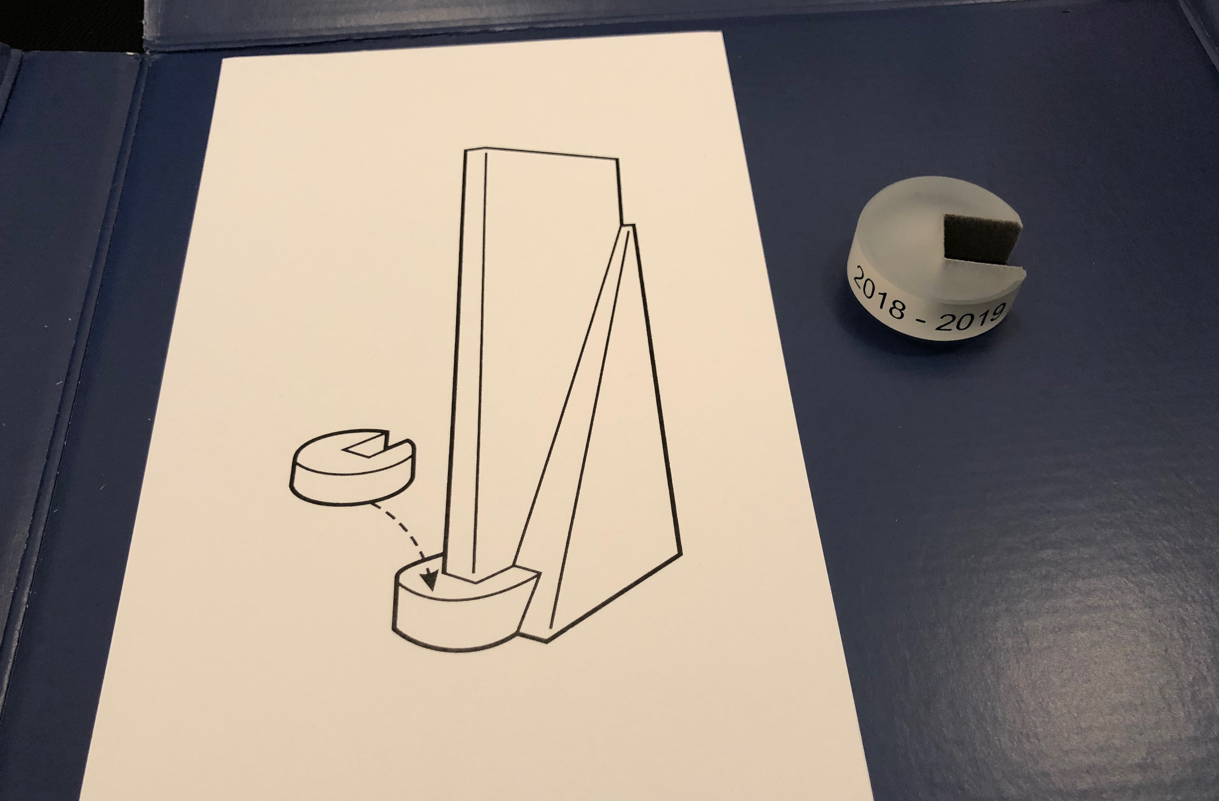 However, the alternative version on Twitter was also very funny!

I also very happy to be attending the MVP Summit in March. I wasn't able to attend this in 2018 due to other commitments, and I heard from other MVP's that I know that it was very good, so excited about attending in 2019.

This year I am very happy to say that I shipped quite a few things (some which have been on the back burner for a while, and others that are brand new). These included:

In addition, I also got access to the GitHub Actions Beta, and I was able to create an action specifically for Cake, which allows you to run a Cake script as a result of an action on your repository. I showed an example of how you could send out a Tweet, based on a milestone being closed on your repository.

I seem to be on a little bit of a run of creating Visual Studio Code extensions. They are very easy to create, and can be as complicated or simple as you want. I have at least one more idea for another extension that I am going to try to find time for in 2019. In terms of download numbers for the extensions, these can be seen here:

Cake continued to go from strength to strength in 2018. With 11 releases, which included the release of a .Net Global Tool version of Cake, there was plenty of things to be excited about. Since releasing this in August, it has been downloaded over 100000 times. There are now also official Docker images available for Cake

The Cake-Contrib Organisation continued to grow as well, now with:

I have a growing number of NuGet packages, and associated total download count: 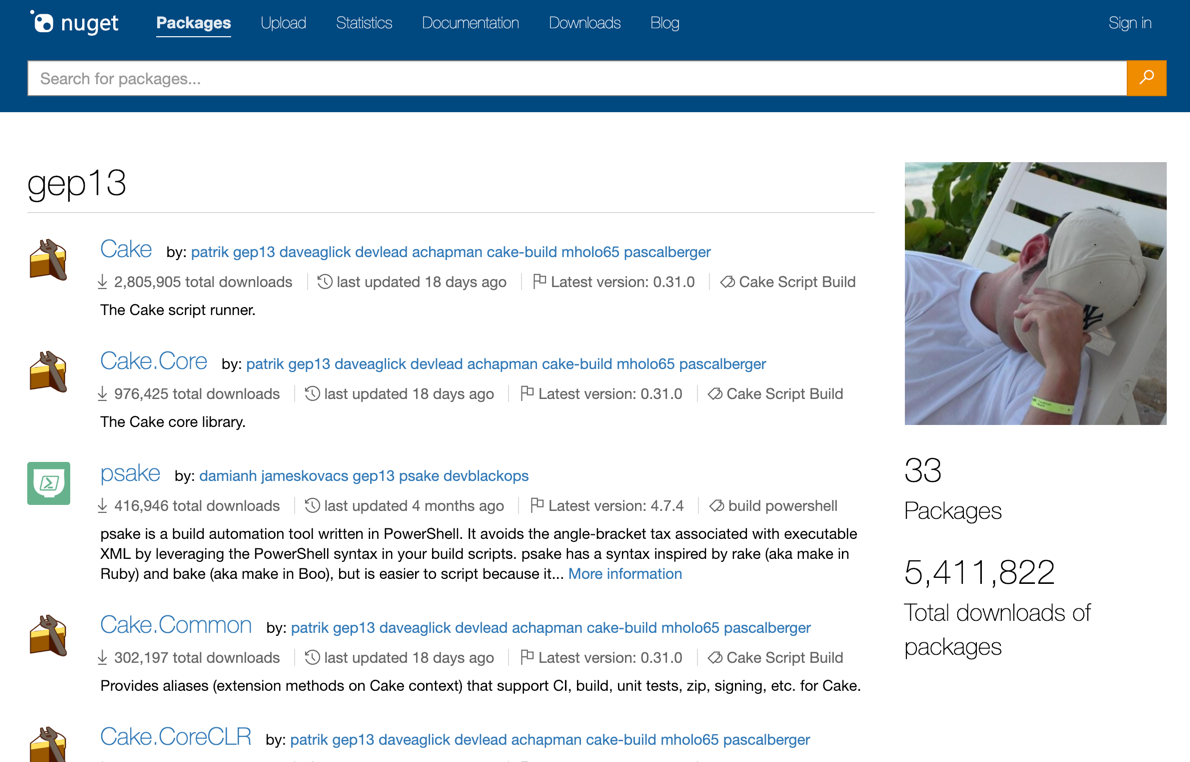 The number of downloads of Chocolatey packages that I help maintain has continued to grow this year: 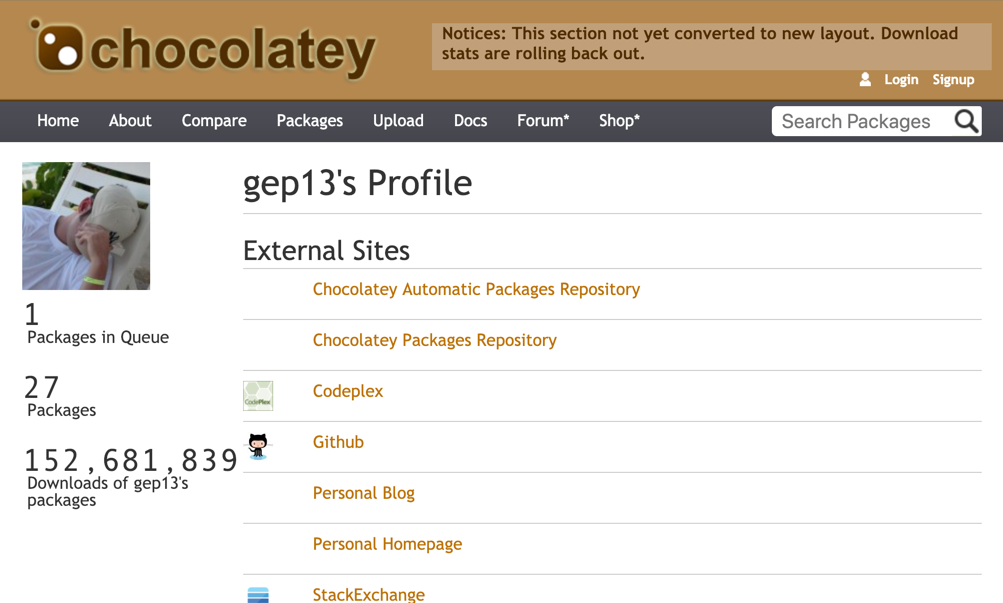 Compared to last year, my GitHub Contributions are less this year (2423 compared to 3513) 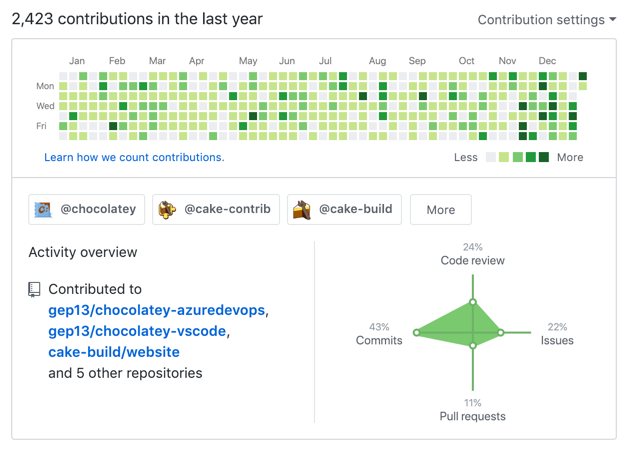 However, in part, this was a conscious decision on my part. In hindsight, I sort of got carried away last year, trying to obtain a perfect streak of GitHub Contributions. This year, this was far from a goal, and instead, I opted to close the laptop and concentrate on other things. I still like to think I made a difference with the contributions that were made. More on this in other sections of this blog post.

Continuing the yearly tradition, I took part in Hacktoberfest, and was able to complete the event, which resulted in me obtaining some very cool swag: 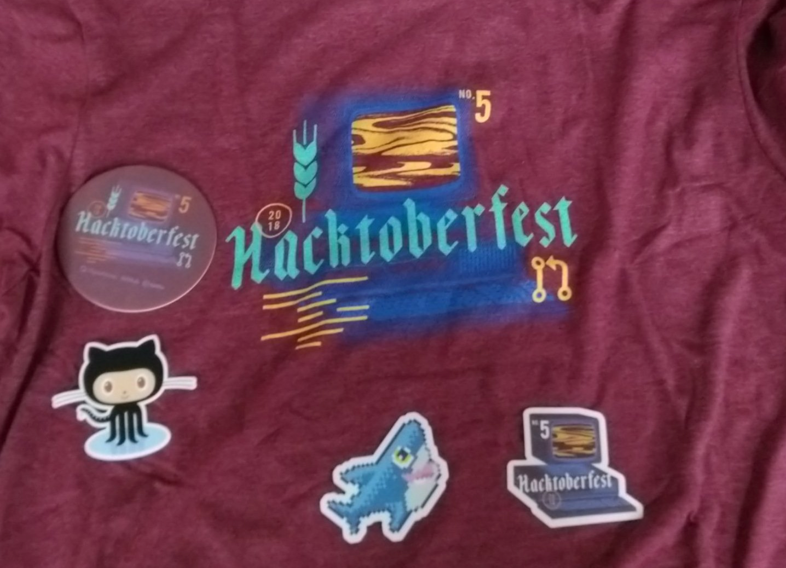 In addition this year, Microsoft got in on the act, and provided an Ashley McNamara original t-shirt for a contribution in to a Microsoft GitHb Repository: 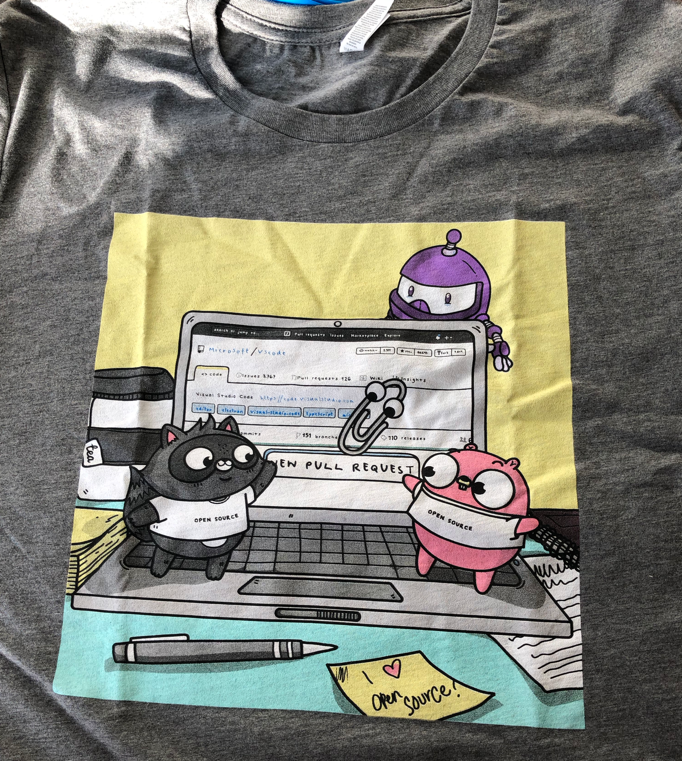 This year, I witnessed first hand the darker side of Hacktoberfest. This is where people contribute spam pull Requests to Open Source projects in order to obtain the free swag. This puts an unnecessary burden on Open Source Maintainers, and it is a sad side effect of the event. In an email from DigitalOcean after the event they stated that they are going to try to address this ahead of the next event, and I hope that they are able to do this.

As part of our local User Group, we ran a Hacktoberfest event to introduce people to the event, and also to how to make contributions to Open Source Projects.

In addition to Hacktoberfest, I once again took part on the 24 Pull Requests event, and successfully completed it: 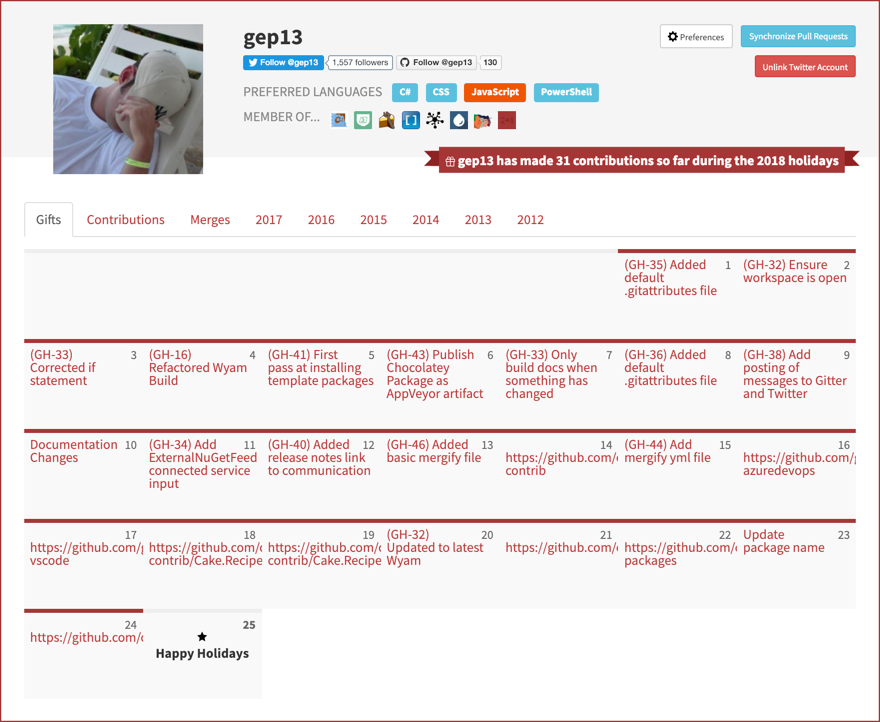 I also manned the Gitter Room for the event similar to last year to address any questions that came up.

One slight difference in the event this year was that it wasn't just contributions in the form of pull requests that were accepted. You were also able to manually contribute other contributions such as reviewing pull requests, asnwering Stack Overflow questions, speaking at User Group events, etc. All of this was in order to try to make 24 Pull Requests more inclusive to everyone. There is more detail on this in the blog post about it.

Continuing on from last year, I continued to answer questions on Stack Overflow related to:

As a result, my reputation increased to 7086 (an increase of 2289). Somewhat surprisingly to me, this put me into the top 2% overall on Stack Overflow:

I also saw an increase in the numbers of badges that I have been awarded: 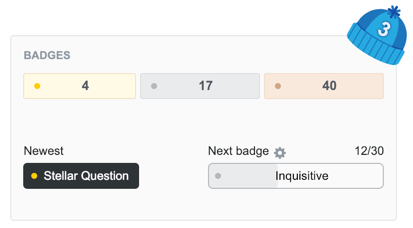 And my impact increased to (an increase of 106k):

I made a concerted effort in 2018 to make more YouTube videos, and this resulted in quite a few new playlists being created. These centred mainly on releases for the various Open Source Projects that I work on, but also showcasing some specific features on those tools.

One major change in the most recent videos that I have created is that I have started appearing in the videos. This was a big step for me, as I am not particurlay confident in this area, but I "think" they work. In order to make this happen, I have purchased a green screen, and use the OBS software to apply a chroma filter to the camera input so that I can "float" above the desktop.

If I thougth that putting myself into my YouTube videos was a big step, you can only imagine how scary it was to start doing live streams on Twitch, but I did it:

So far, I have done two live streams, focusing on Chocolatey, and I have plans for continuing more in 2019, as well as focusing on other technologies such as Cake. If you are interested in following along, you can join my stream here.

Aberdeen Developers continued to host events in 2018 (mainly thanks to the work of Douglas Cameron) but I helped out where I could. This year, we hosted events on Azure Functions and Cosmos DB, Blockchain, and Artificial Intelligence. In addition, we started what is being referred to as .NET and Natter events, which are much more informal events without a speaker, but more of a chance for people to get to together to talk about things that interest them.

In December, we ran a gofundme campaign with the aim to raise money for purchasing equipment to allow us to record, and potentially stream, our meetups. I am very happy to say that we succeeded in meeting our funding target, and the equipment has now been purchased. Now we simply need to figure out how to make it all work!

Thanks to the .NET Foundation, we were able to start using meetup.com for hosting/advertising the events that we run. This has turned out to be very successful.

In 2018, I kept my officehours.io profile open, and as a result, I had 3 very interesting conversations with people on various topics:

The format of officehours.io takes a little bit of getting used to, but once you "grok" it, I think it is a very useful medium.

If you are interested in talking to me, feel free to reach out.

And that, as they say, is that! Once again, this year has FLOWN by, but it has been a very enjoyable year, and I am looking forward to more in 2019! I hope 2018 was good to everyone!