In yesterdays blog post I described how I had been able to create a custom GitHub Action to execute a target from a Cake script. To follow up on that, I thought it would be good to show how you can actually make use of this custom action, to achieve something useful in terms of a GitHub Action.

What are we going to do?

Almost exclusively on the Open Source projects that I work on, I use GitHub Milestones to collect the Issues/Pull Requests that are going to be included in any given release. Once everything is ready, I release the "bits" of the project, and then I close the Milestone. Wouldn't it be good if the act of closing a Milestone were to trigger a notification to Twitter, to let people know that the release is ready. I think so...

Of the 28 events that can trigger the workflow of a GitHub Action, one of them is the milestone event, which will trigger:

Any time a milestone is created, closed, opened, edited, or deleted.

Now, we only want the Tweet to be sent out when a milestone is closed, but based on the documentation, we should be able to inspect the event payload (which is a JSON file), to see more details about the event, specifically, the action property, which will either be:

When it comes to parsing JSON files in .NET, the obvious choice is to use Newtonsoft.Json. And in terms of Cake, a community member, redth has already done the work of creating a Cake Addin (Cake.Json) to make this incredibly simple. Parsing a JSON file is as simple as:

In the same way that parsing a JSON file in Cake is a one-liner, the same is true of sending a Tweet. Using the Cake.Twitter addin, sending a tweet is as simple as:

In order to get the above keys and tokens, you will need to create a developer account on Twitter.

Based on the documentation GitHub Actions provides an environment variable which contains the path to a file, which has all the JSON payload of the event which triggered the workflow. By inspecting this environment variable, and reading the contents of the file, we can figure out whether the event was a milestone being closed.

Putting it all together...

In the previous blog post, we left the workflow of our action triggering off a push event, with a single environment variable and argument. It was defined as follows:

To make our workflow trigger on a milestone event, we will need to change the on parameter, and we will also need to add some secrets to the definition, which will store the Twitter Keys and Tokens, so that we can actually send the Tweet. After updating, the workflow then looks like the following: 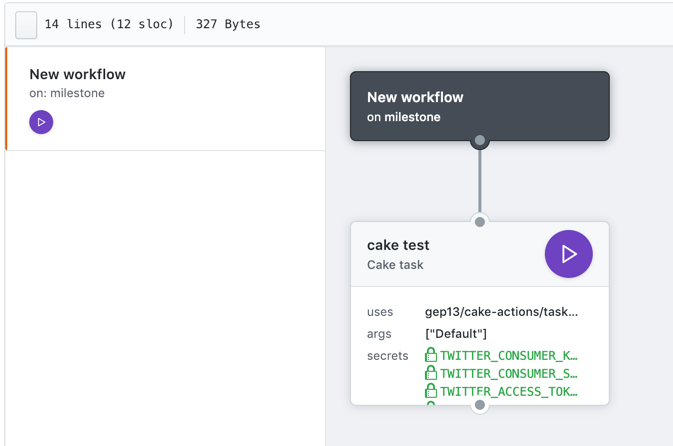 With the workflow defined, now we can turn our attention to the Cake Script itself. This will need to:

The end result (which likely needs some additional error checking, but which works for what is trying to be shown here) looks like the following:

With all of the above checked into my test repository, I went ahead and created a new milestone. Looking at the logs, I saw the following: 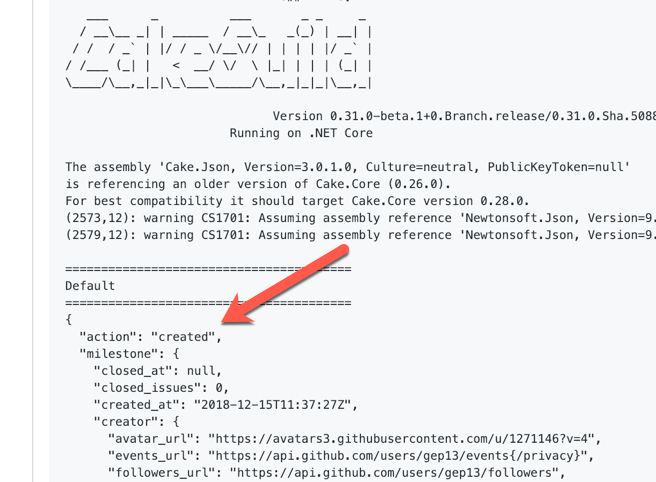 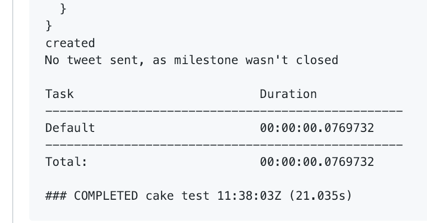 I then went ahead and closed the milestone. Checking the logs, I then saw the following:

I honestly didn't think that this would "just" work the first time, but it did! I am really starting to like this system, and the integration of Cake means that I have access to a huge library of addins for doing a huge number of things.

This is just one example of what you can do as the result of an event coming from your repository. At last count, there are 240 different addins for Cake that means that there are lots of "things" that you can do based on these events being triggered. When it comes to sending out notifications, there are addins for sending messages:

I would encourage you to take a look at the list of addins, and have a think about the actions that you can add to your repository.

After doing the above, I found the following which I "think" I would be able to use to filter the milestone event to only trigger on closed events, but I haven't yet tested to see if this would be possible. Part of me quite likes containing all the logic in the Cake script, but I guess there is a higher overhead to pay to use the Docker container for Cake if it isn't actually required. Something to look into for future tests.