On the 30th March 2021 (with the help of the 0.18.1 release), the Chocolatey GUI package passed 1 million downloads on community.chocolatey.org:

With the release of the 0.18.1 version of Chocolatey GUI, the total downloads is now over 1 million! It's a huge milestone, and I'm so happy that it's got to this! Thanks to @chrissie1 @RichardSimp @punker76 and everyone else who has helped over the years! https://t.co/8x6rbJ9bmu

This is a HUGE milestone for the project, and one that I wanted to mark, so I thought I would take you all on a little trip through the history of the project, explaining how we got to where we are today.

Over the years, we have had 34 different contributors to the project, and I am grateful to each and every one of you! Obviously, I can't call out each contribution in this blog post, so I am called out the major changes that have happened over the years.

Hot on the heels of this, Christian Baes decided that he wanted to start working on a GUI application that could be used alongside Chocolatey. The first commit was made on the 11th September 2011, and the first version (0.0.1) was released on the 10th September 2011 (Yes, that isn't a typo, the first package was pushed before the first commit made it into the repository :smile:).

Chrissie blogged about this at the time, and captured some images of that first release.

A couple years later, and with some help from Miracula a new version of the application was released that provided some new functionality. Again, Chrissie captured details about this in his blog post.

At the time, the project was hosted on Chrissie's GitHub profile at https://github.com/chrissie1/chocolatey-Explorer.

I started taking an interest in Chocolatey GUI at the start of 2013, with my first commit being made on the 11th February 2013.

Whilst making contributions into the repository, I spoke with Chrissie and we came to an agreement that we should move the repository into my GitHub profile, where I could continue the maintenance on the project.

Around 16th October 2013 the repository was moved to gep13 GitHub profile. We can see where some of this work got started and we established a Google Group for answering questions related to the application.

At this time, you could find the project source code at https://github.com/gep13/chocolatey-explorer

After discussions with Rob Reynolds, it was decided that it would be a good idea to bring the project into the Chocolatey GitHub Organisation, where the maintenance effort could be continued. At the beginning of 2014, the transfer was completed, and the repository was renamed to be ChocolateyGUI. You can see where the readme was updated to reflect this.

From then on, the project could be found at https://github.com/chocolatey/ChocolateyGUI

You have to hand it to GitHub that each of the URL's continues to be re-directed to the correct place!

On the 16th September 2014, Richard Simpson made his first commit in the repository. This was the start of a transition from the Windows Forms Application to use WPF, and on the 28th September 2015, version 0.12.0 was released.

On the 27th September 2017, Jan Karger made his first commit into the repository.

Since this first commit, Jan has worked on a number of the most sought after features within Chocolatey GUI, for example the Tile View for packages, as well as the Dark Mode.

There are a number of improvements and changes that I would like to see added to Chocolatey GUI, so keep your eyes peeled for new versions shipping! Here's to the next 1 million downloads! 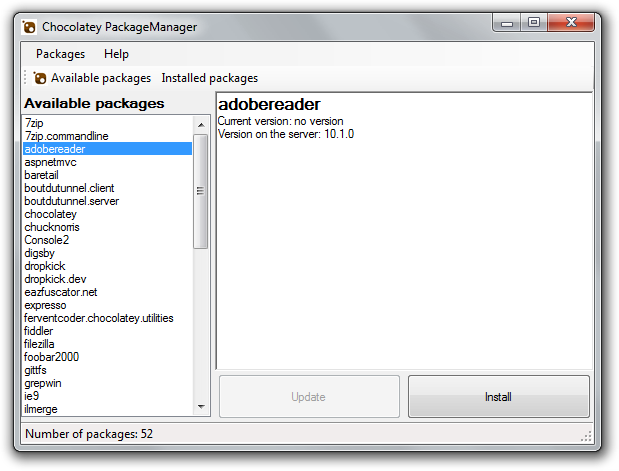 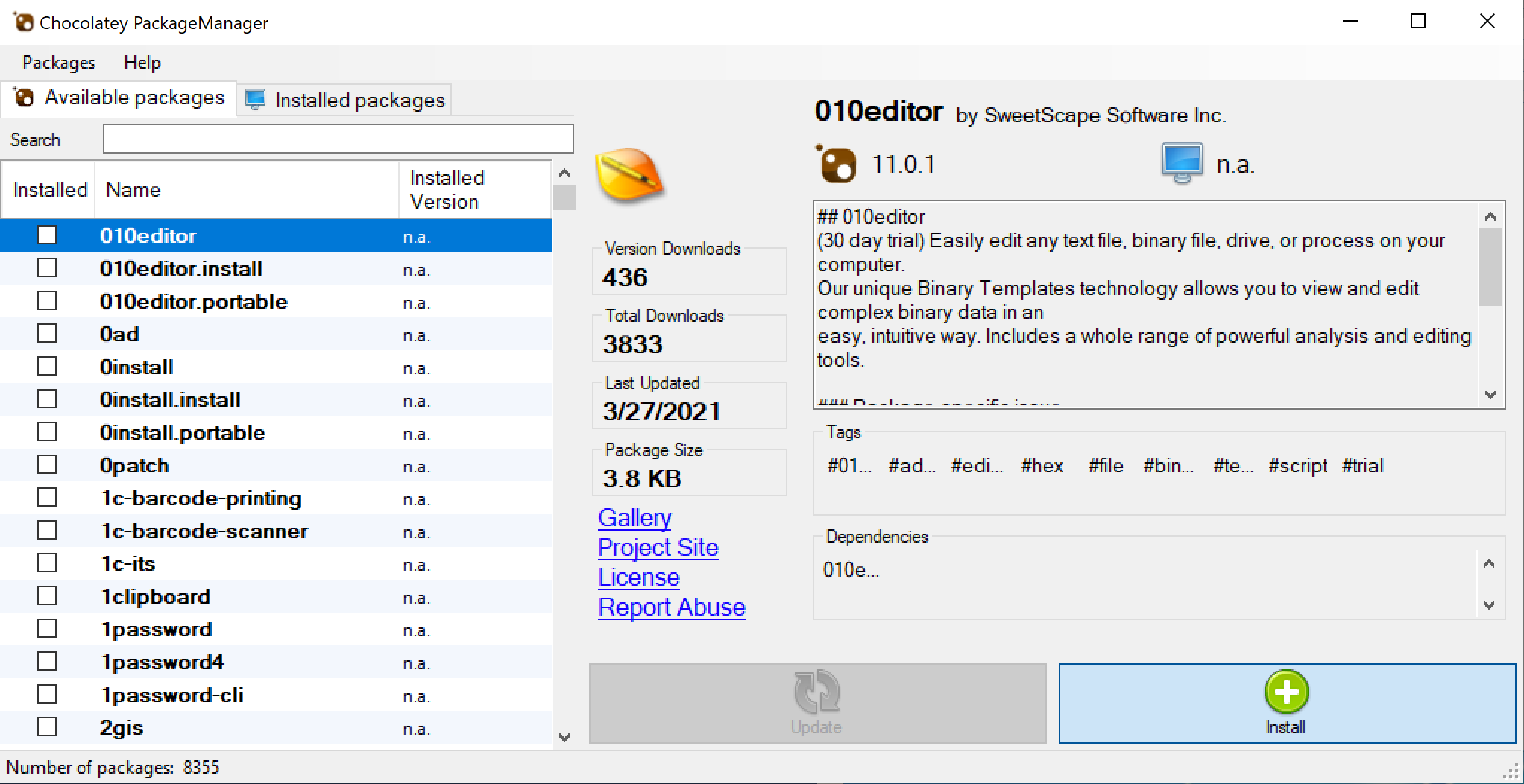 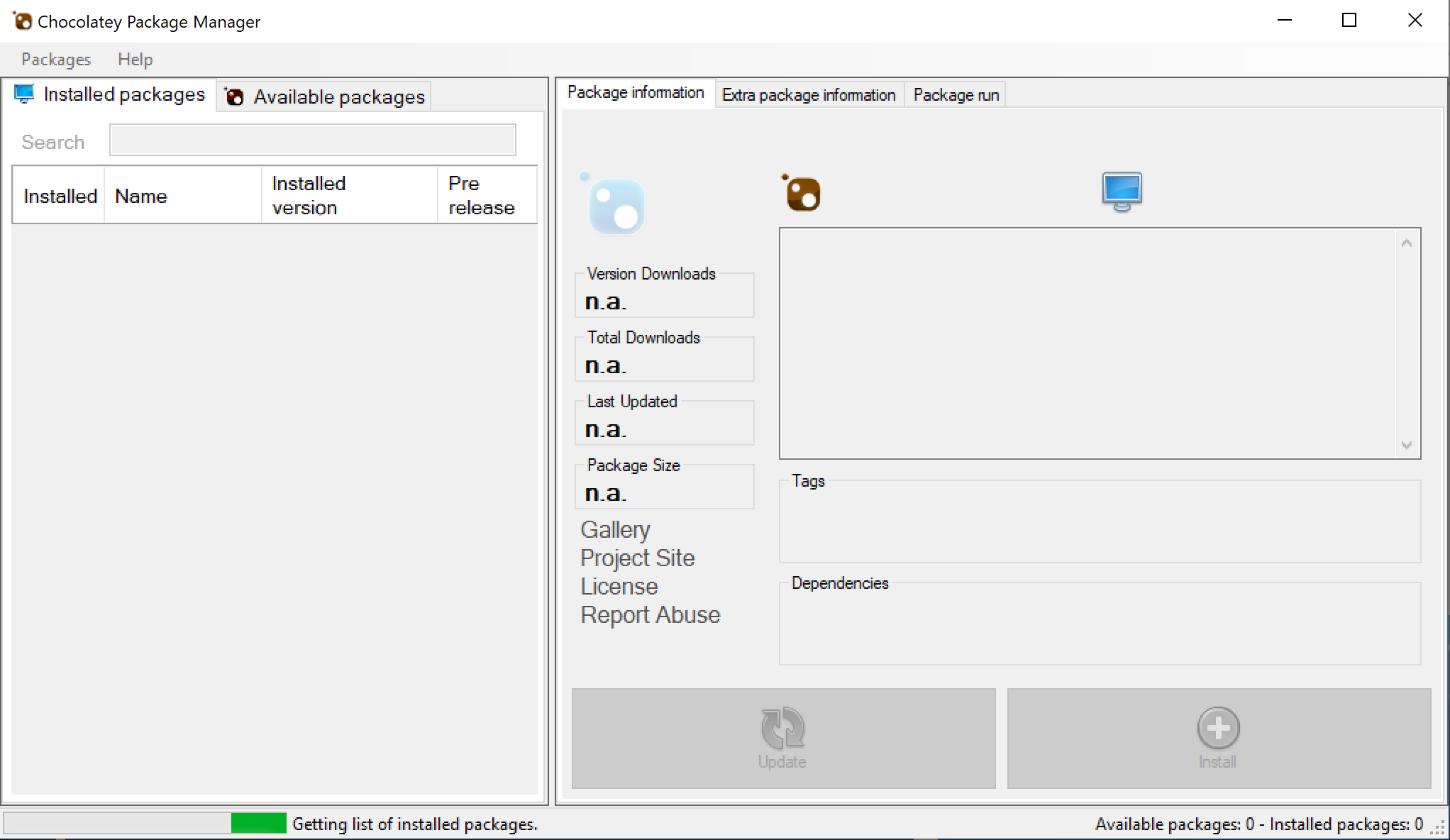 The new WPF version of the application is released, with a colour palette that matched the Community website at the time. 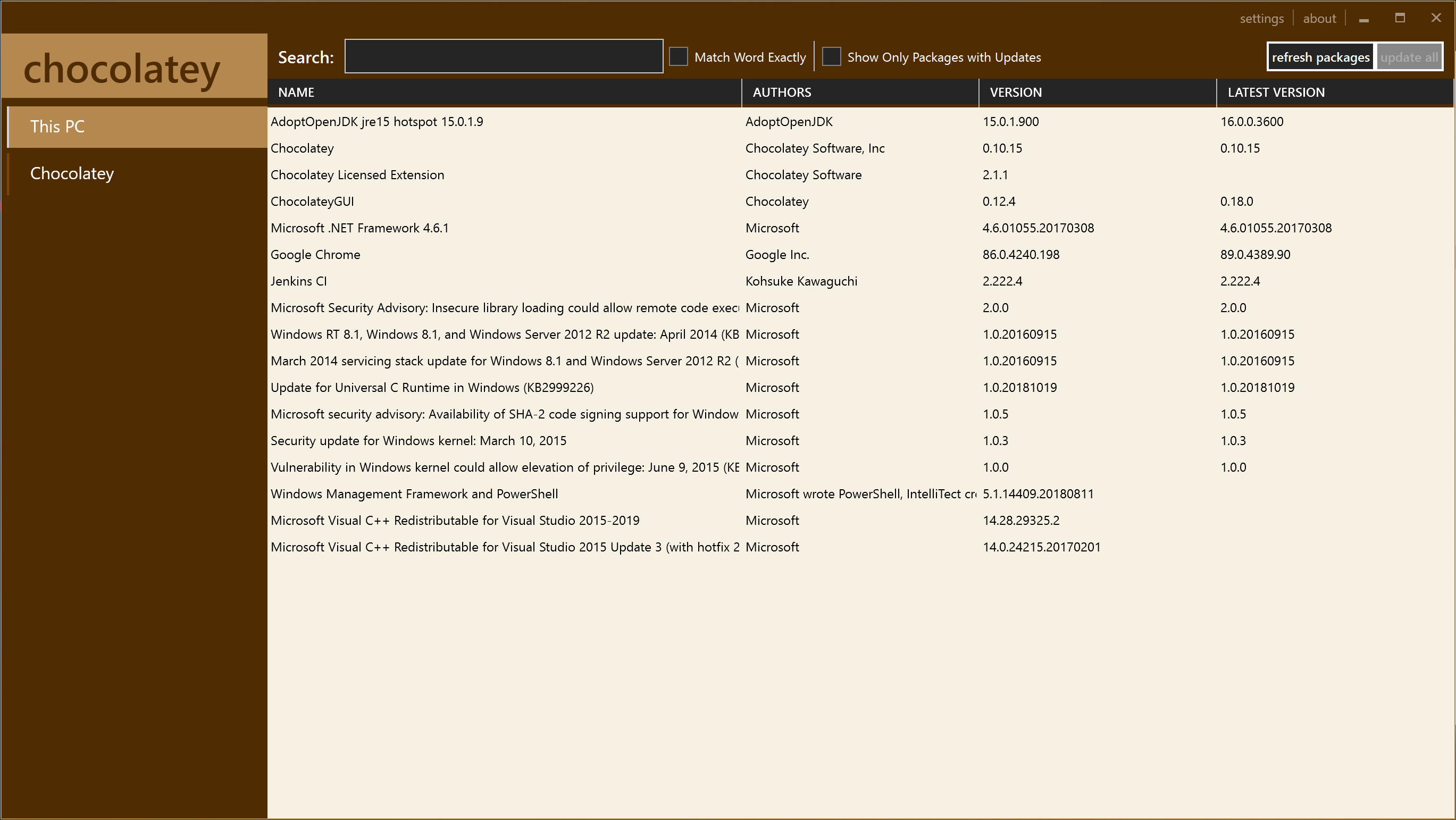 A new colour palette, along with a very cool (in my opinion) tilting logo, was introduced to the application. This mimics the tilting logo that was available on the Community website at the time. 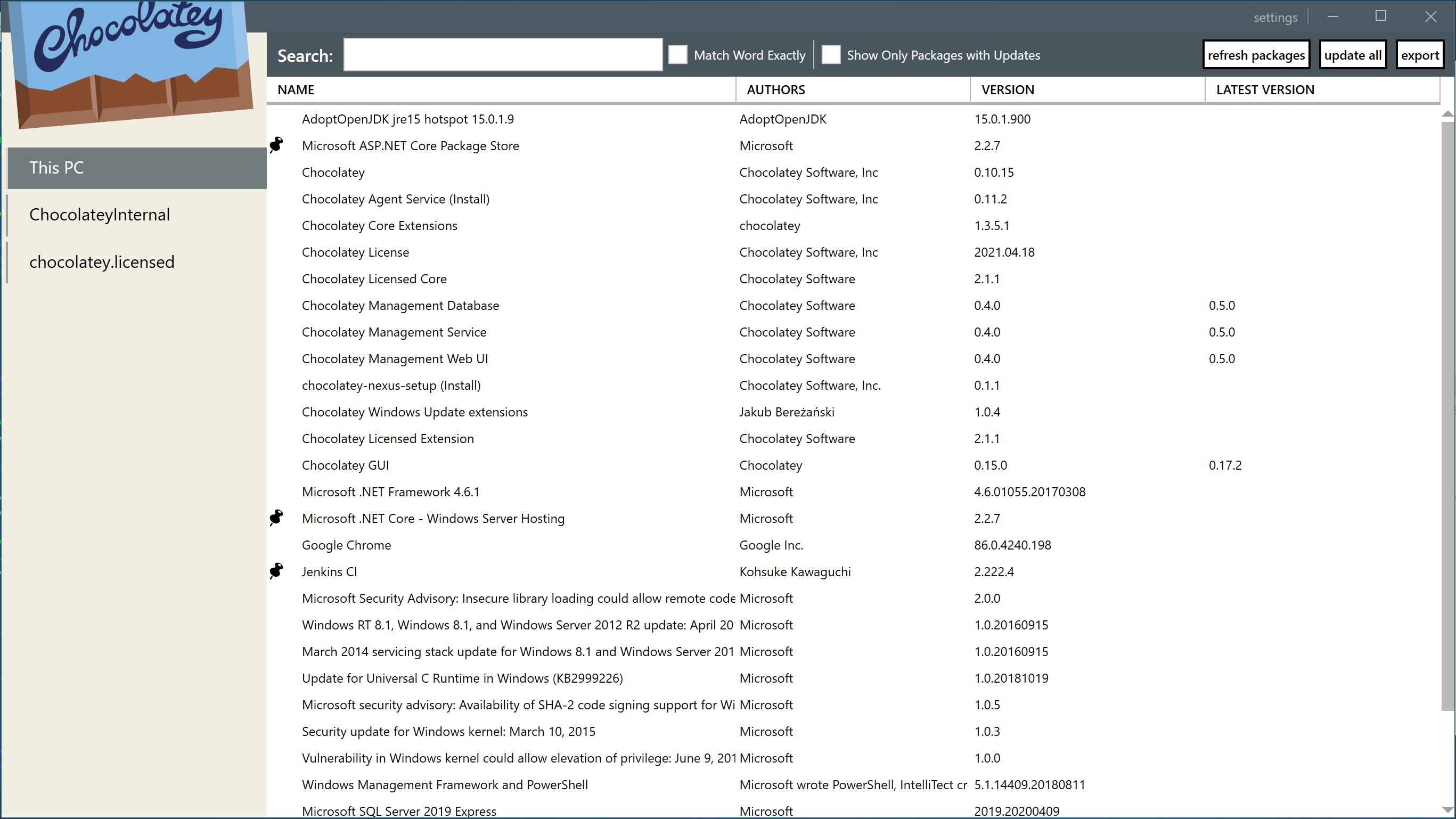 Tile View is now available, but it isn't enabled by default. 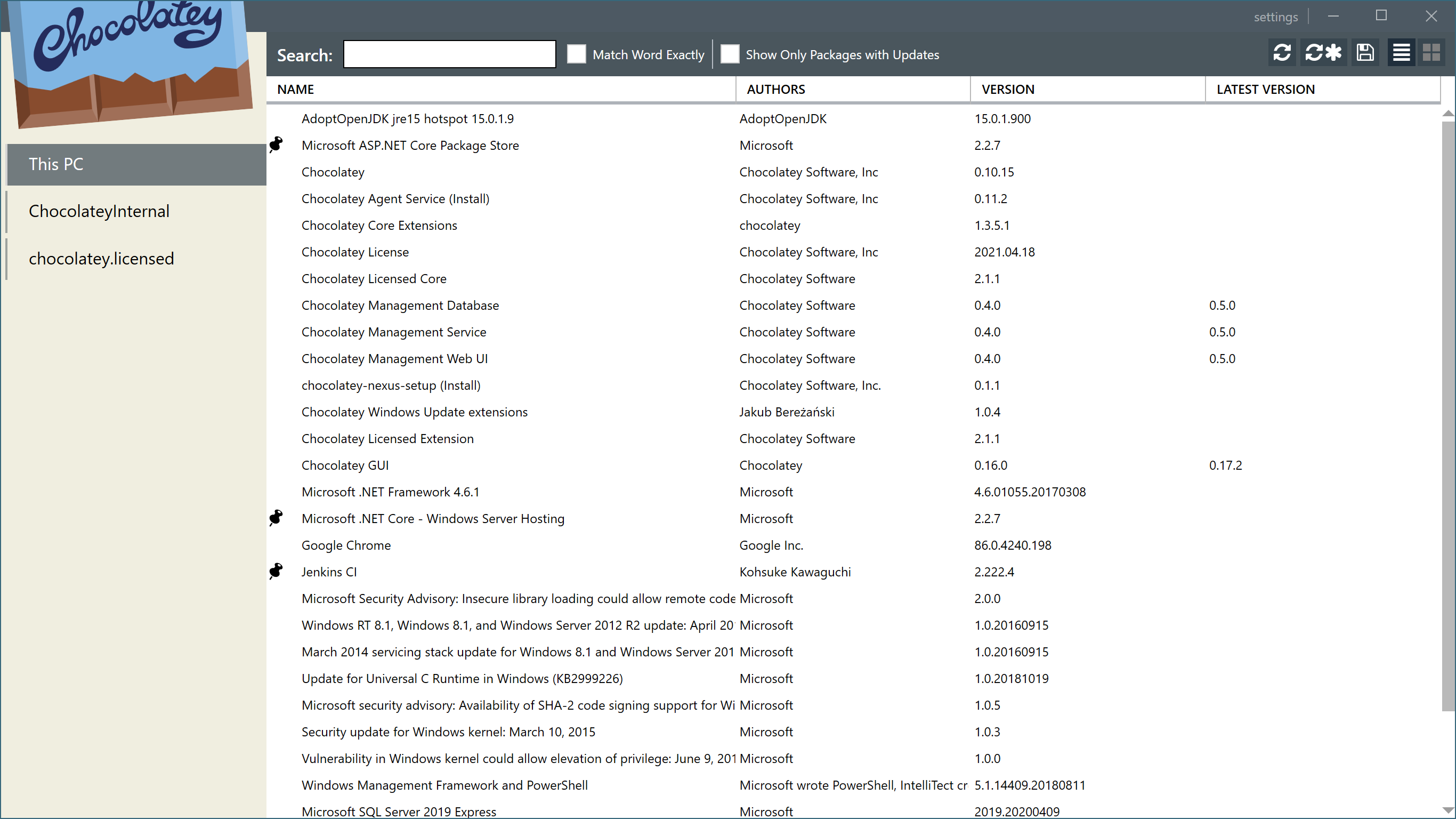 The tilting logo was removed, and replaced with a static logo, and addition UI elements to indicate when packages are outdated was introduced. 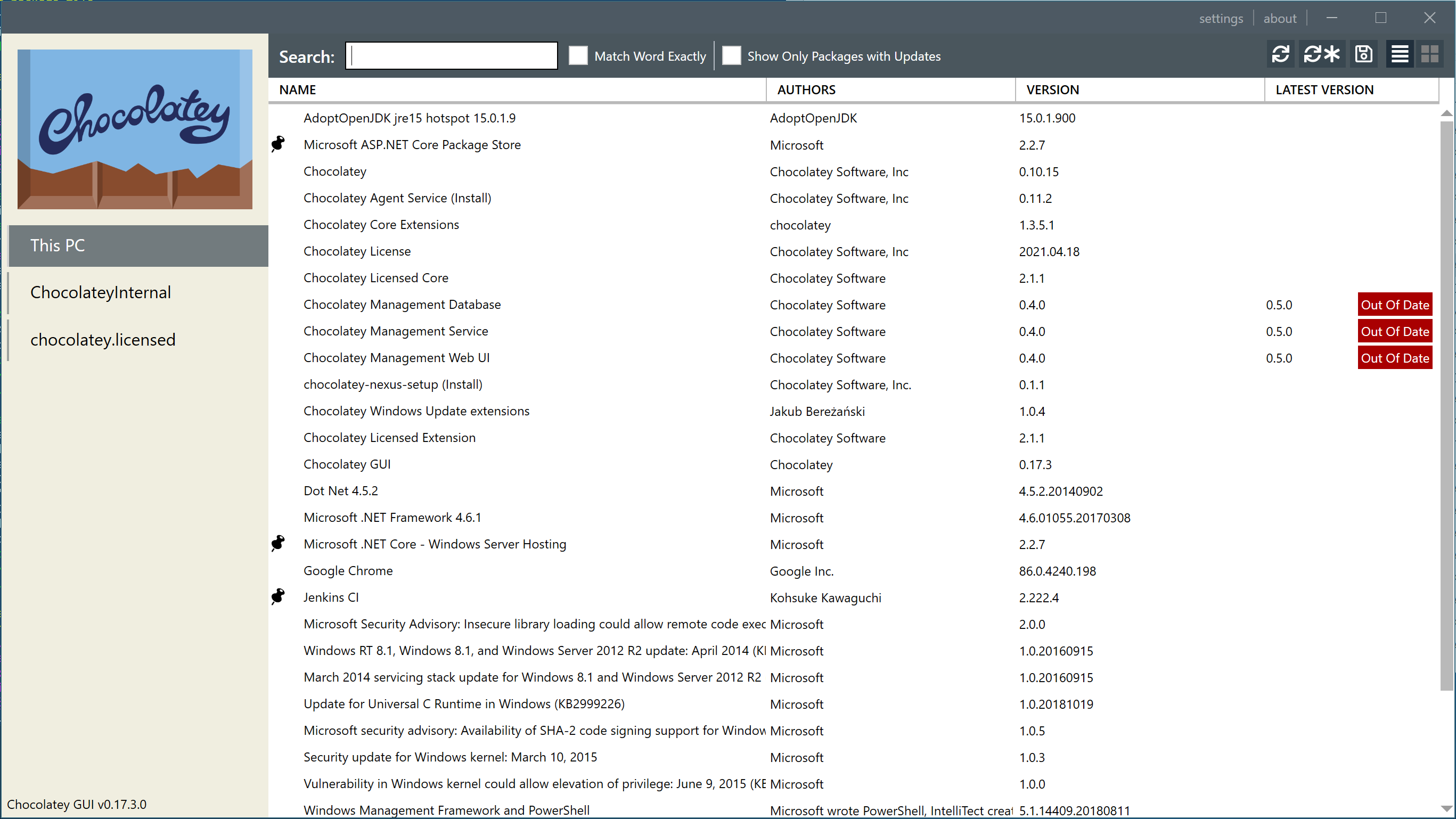 Tile view is enabled by default, and a new dark mode is introduced. 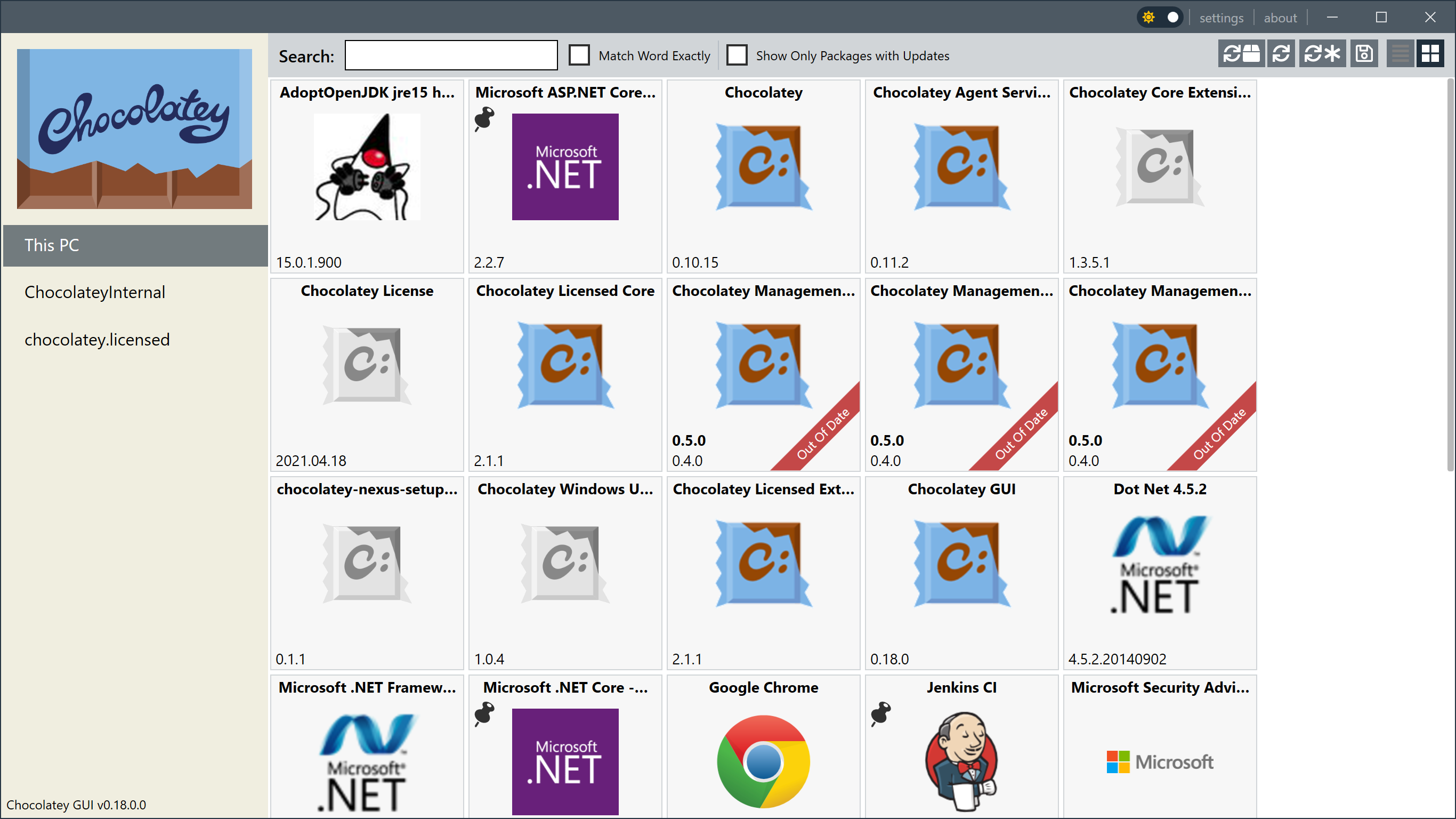 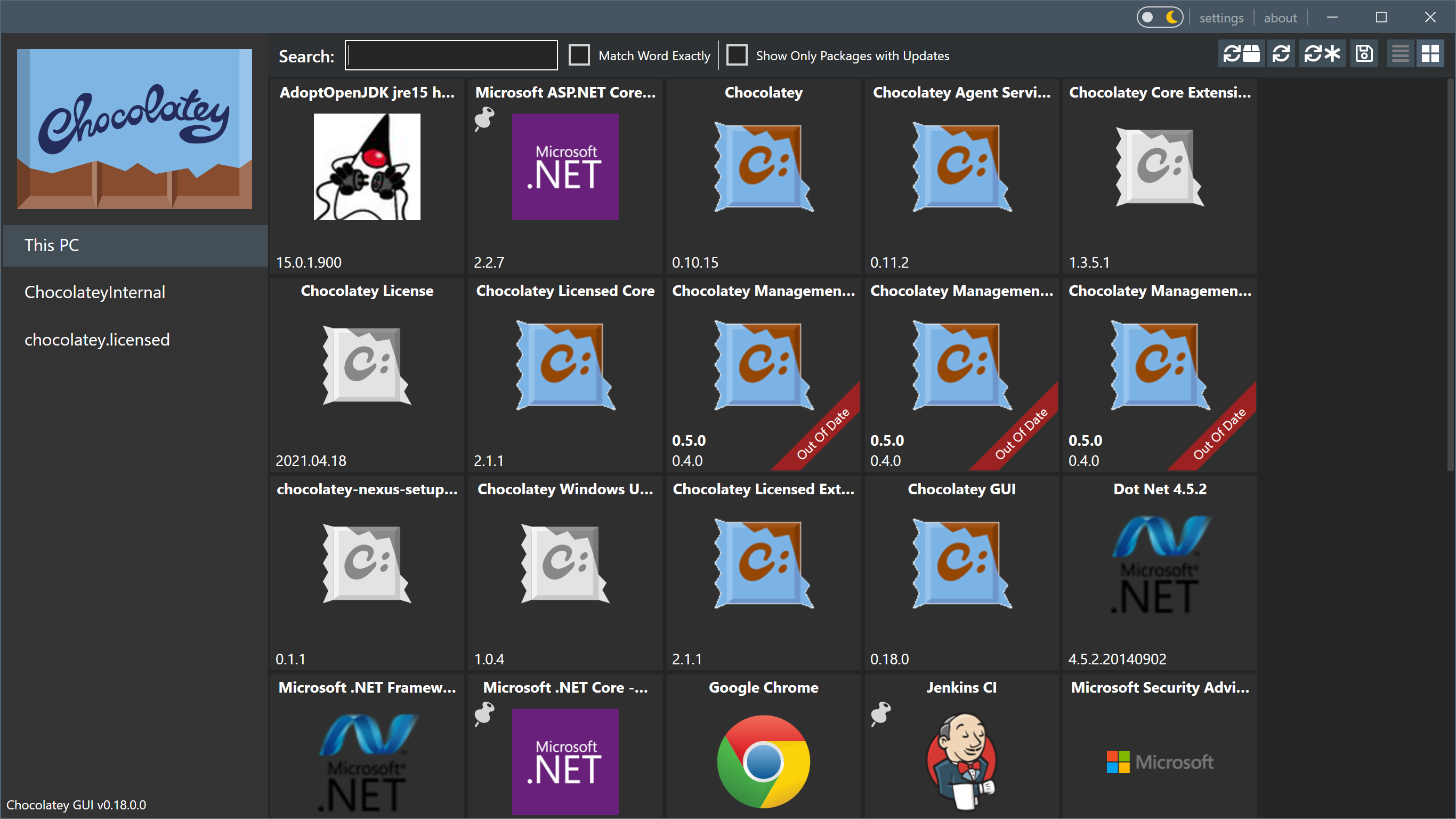